GoodByePolarBears have been writing and recording together since 2007. Try this link to hear the latest recordings:

They are comprised of: 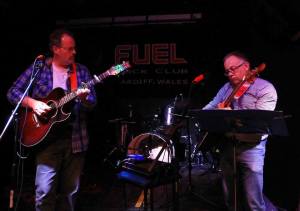 Based in Cardiff where they write and record at The Bunker at A.I.M. Studios, Canton, their songs tend to be structured around the very accessible end of jazz chord territory but with a heavy nod towards alt rock. Lyrically dealing with sly sideways glances at modern life and occasionally just touching the heartstrings.

Both Bears would reference the likes of Radiohead, Elbow and Pink Floyd as influences but where Hywel would then tangent off towards XTC, Joni Mitchell and Everything Everything, Neill would cite Elvis Costello, Joe Jackson, Bob Dylan and Airbag as touchstones.  For Hywel chordal harmony rocks; for Neill lyrical wordsmithery does.  The middle ground that they can both agree on would be Steely Dan.  It’s fertile ground and full of promise.

3 thoughts on “Who are GoodByePolarBears?”

What are we up to?

What you have to say